The request to include ‘associated companies’ on a management liability policy is common. The response from underwriters is not. Whilst every request is unique, there are some general considerations which frame a discussion around adjusting the policy beyond the standard policyholder and subsidiary framework. At the same time, it should be recognised that it may not be a unilaterally positive posture to include these organisations.

Under UK tax law, a company is an ‘associated company’ of another company if one of the two has control of the other, or both are under the control of the same person or persons (Corporation Tax Act 2010). Here, it is evident that the insurable interests of organisations are aligned, so the case for a single policy is strong. In a broader sense, and in different contexts, an associated company is one in which the ‘parent’ owns only a minority stake, so it may not have the control. It is in these scenarios that the case for inclusion weakens.

Some underwriters will take the position that each organisation should buy a policy, and this is particularly the case where transactions take place on inflexible e-trade systems. However, this can fail to reflect the practical reality and underwriters should seek to understand the nature of the relationships. Key to these considerations will be:

Having accepted the case for covering associated companies, it is important that it is done so properly. Lumping organisations together into the policyholder definition creates tension with the mechanics of some of the potentially most vital elements of the policy, such as providing instructions to terminate or to invoke discovery, with these needing to come from ‘the policyholder’ to be valid. Another potential difficulty is around divestment or insolvency. Without control of the policy, it is much more difficult to influence the availability of future cover and underwriters are better equipped to be able to cherry pick if circumstances change, with run off very much less likely to be available in these situations.

Pricing adjustments are to be expected, although not necessarily a fixed feature. Clearly, a policy per company approach carries a greater cost and it is reasonable to expect that an underwriter would alter the premium if organisations that are not part of a single structure are brought together in the same policy. The counter argument here is that if the associated companies were actually part of a group, the pricing framework could be likely to be the same because the rating data points are not precise enough to pick up the difference within a larger number. Again, much depends on the fact patterns in each case but, on balance, the argument favours the underwriter here.

It is important to keep in mind that well-constructed policies will recognise the risk of directors managing and representing minority interests in other organisations, typically joint ventures, and will automatically provide contingent cover. What is clear, though, is that there is no ‘one size fits all’ answer and it most often needs a conversation to consider the risks and benefits of the respective outcomes, or whether or not a case for inclusion exists in the first place. 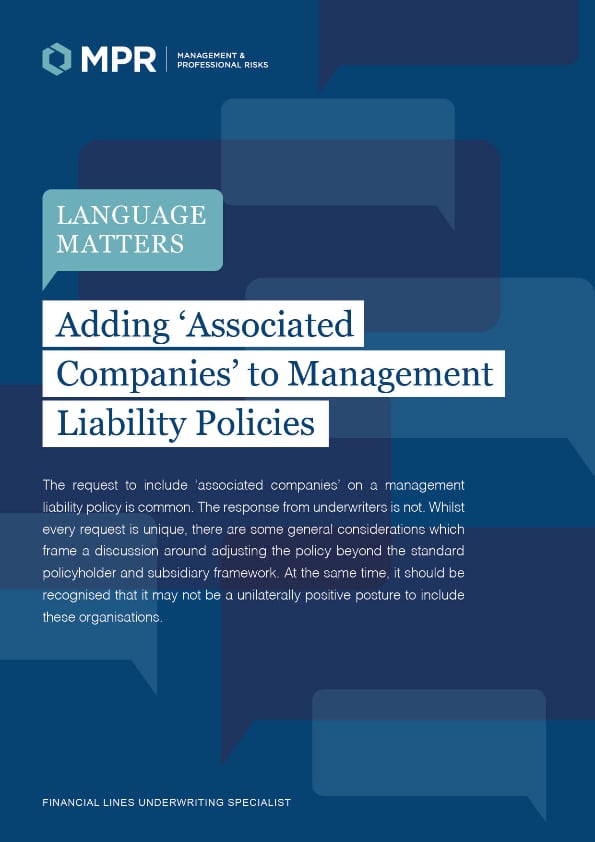 All Employees as
Insured Persons

A recent policy comparison highlighted ‘all employees as Insured Persons’ as the main policy feature. From the perspective of a director, I found this both curious and puzzling.

D&O and the
Duty to Defend

The ‘duty to defend’ is a long-standing provision in D&O policies and, in broad terms, allows the appointment of a lawyer to be the choice of the insured person(s).

Governing law (or “choice of law”) and jurisdiction are quite closely linked, and are often dealt with in the same place, but they do cover 2 slightly different things.