A recent policy comparison highlighted ‘all employees as Insured Persons’ as the main policy feature. From the perspective of a director, I found this both curious and puzzling. It suggests that adding all employees to the D&O policy presents a straightforward solution and an obvious advantage, and some managers may well see this as an inclusive and relaxed approach. However, senses should be tuned to some of the sensitivities this could present, and that the addition of such parties can be dilutive to the cover available for the appointed Directors and Officers. In some cases, there is even doubt that the policy could even work in the first place, largely down to the policy being built around the often sensitive subtleties of indemnification.

The most important initial point is to understand that the obligation of an organisation to indemnify Directors and Officers is much stricter because it is they who bear the exposure of personal liability, through their fiduciary duties, that regular employees simply do not. To bunch everyone together might assume that they are all treated the same when they most definitely are not. If the obligation to indemnify an individual is not in the articles/memorandum of association, byelaws or separate agreement (which it typically would not be for employees), then it is difficult to see how a policy with traditional architecture could work, as the following example language shows:

Side B: Company Reimbursement Cover
The Insurer will reimburse the Company for Defence Costs and Loss arising from a Claim against an Insured Person that it has indemnified.

Set against the Model Articles of Association for private companies limited by shares, at item 52:

52.—(1) Subject to paragraph (2), a relevant director of the company or an associated company may be indemnified out of the company’s assets against—

Since D&O policies presume indemnification to the degree available for Directors and Officers, that extends to any additional parties that can prove that they are an ‘employee’.

The handling of indemnity for regular employees is not addressed. Consequently, there is no policy framework to navigate. Now it might be that, as there is no indemnity, claims against regular employees might just fall for cover under Side A. However, this opens the door to anyone who can prove an employment relationship, such as independent contractors or third-party advisers, and illuminates a route to cover.  Since D&O policies presume indemnification to the degree available for Directors and Officers, that extends to any additional parties that can prove that they are an ‘employee’. So, a feature created as a policy advantage could actually end up being quite the reverse. There is an argument to say all of this is irrelevant, as employees ought not to be drawn into scenarios that should be reserved for office holders. However, a tidier and more surgical solution could be to specify the scenarios where colleagues might get brought into an allegation, such as employment disputes, or extend the insured person definition to those who could, such as managers or supervisors. This seeks to preserve the benefit of the policy for the intention it was created and articulates much more clearly where, when and for whom it operates. 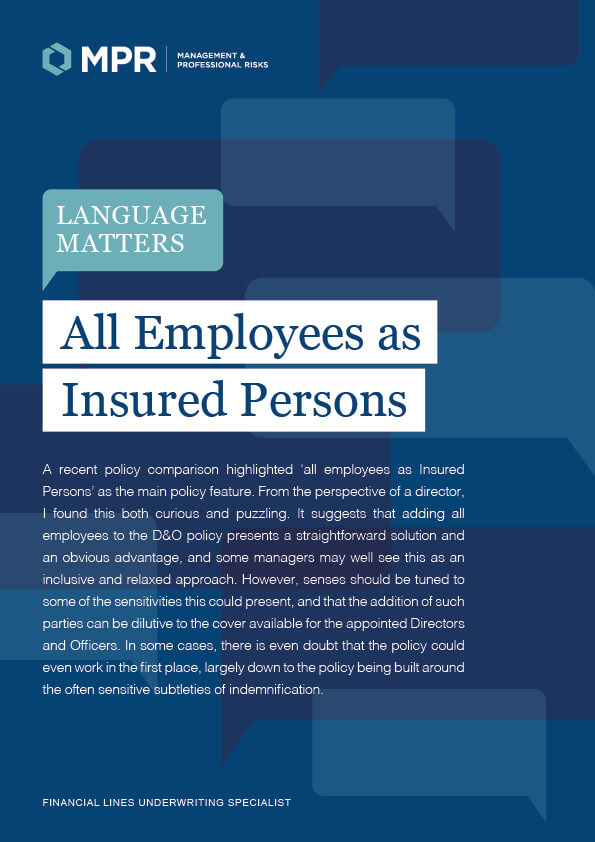 Once upon a time, deductibles were a common feature of Directors and Officers (‘D&O’) Liability policies. Typically reserved for larger or more challenging private risks, or those that were publicly listed, they faded from view as the soft market invaded every element of the contract.

D&O prices are on the rise, following a decade of soft market conditions. As well as price increases, it’s important to look out for other features and potential changes at renewal.

The profile of litigation funding has been raised recently with the case of RBS, and there is further evidence that it is emerging as a greater threat in the event of alleged wrongdoing, whatever the nature or scale of the organisation in question.