Once upon a time, deductibles were a common feature of Directors and Officers (‘D&O’) Liability policies. Typically reserved for larger or more challenging private risks, or those that were publicly listed, they faded from view as the soft market invaded every element of the contract. The recent change in that direction of travel has seen a re-emergence of the deductible, and in some cases a return on the kind of risks that might not ever have seen them, in particular private limited organisations. How big a deal is this?

The operation of deductibles

It is worth spending a moment revisiting the application and operation of deductibles, which can be broadly summarised as follows:

Here, protection is provided to individual directors and officers when they are not indemnified/reimbursed by their organisation, often as a result of the law or financial incapability. This clause also potentially operates if an organisation simply refuses to pay the legal defence/loss of a director or officer, or if a bankruptcy court issues an order preventing such indemnification. Indemnification provisions sit in the articles of association, or constitutional document, as a standard provision, or can be contained in a side agreement as a compliment/substitute for the same.

As a dovetail to Side A/Clause 1, this is where the organisation indemnifies/reimburses the directors and officers (often referred to as corporate reimbursement) as it is obliged to, via the articles of association or indemnity in the side agreement/contract. (Side-C cover is worth a mention for completeness – this is cover for the organisation itself for securities claims (so generally only a feature on publicly traded companies). Small and medium private organisations do have ‘entity’ cover, or Corporate Legal Liability as it might be more commonly known, which is broader, but still somewhat limited in scope: Entity Cover: Can Some Body Help Me? ).

How most claims are managed

The vital point to make here is that most claims are managed under Side-B/Clause 2 cover. Precise numbers are difficult to identify but are estimated to be around 9 in 10 claims historically. In the U.S.A., where there is a long-standing legal basis for indemnification, organisations almost always indemnify their directors and officers. Typical Side A claims involve allegations of fraud (where indemnity is not allowed, or the provider of the indemnity is unwilling to support this) or insolvency (where there are no assets available to back the indemnity). Insurers sought to avoid a scenario where organisations could push the claims to Clause 1 and avoid paying a deductible by simply saying they were not providing indemnity. Consequently, D&O polices developed a ‘presumptive indemnification’ approach to claims meaning that, for cover purposes, it will be presumed by the insurer that the organisation indemnify its directors and officers, effectively ignoring what the organisation actually does, or is permitted to do. This presumption of indemnity can be ‘to the fullest extent allowed by law’ or even where prevented by ‘legislative prohibition’. To the extent such legislative prohibition exists, it is narrow in effect, which means loss moves into ‘indemnifiable’ loss and therefore application of deductible territory. The wording of the clauses is understandable, but the language needs to reflect the practicalities i.e. whilst there is always very likely to be presumptive indemnification language, it should just apply where that presumed indemnity is operative.

The vital point to make here is that most claims are managed under Side-B/Clause 2 cover. Precise numbers are difficult to identify but are estimated to be around 9 in 10 claims historically.

In an environment where Side A and Side B deductibles were the same (£nil), much of the foregoing was irrelevant (Side B deductibles have always been in place for U.S.A. claims, typically $25,000, and have remained remarkably static for over 20 years). However, as we move into a phase where deductibles become more of a feature, this is no longer the case and it is beyond doubt that the imposition of a Side B/Clause 2 deductible is a potentially negative change as far as policyholders are concerned. 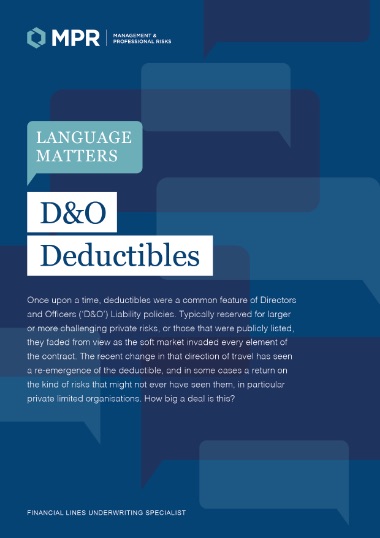 There is little doubt that Directors & Officers (‘D&O’) Liability is a sophisticated product which contains potentially complex concepts and processes. Despite the low profile in a D&O policy features showreel, ‘allocation’ is nonetheless a key component of any contract and plays a role in all claims.

The ubiquity with which the professional services exclusion (“PSE”) appears on D&O policies might suggest a consistent and easily communicated position. Sadly, this is far from the case.

The heritage of ‘Order of Payments’ or “Priority of Payments” clauses is rooted in the introduction of entity coverage to the Directors and Officers (“D&O”) policy architecture in the early 1990’s.