The ubiquity with which the professional services exclusion (“PSE”) appears on D&O policies might suggest a consistent and easily communicated position. Sadly, this is far from the case. Despite this being the most regularly applied discretionary exclusion, inconsistency exists around its purpose, construction and impact.

An appropriate place to start might be to consider two of the factors that are relatively clear:

In a professional services claim a claimant normally takes the rational approach and sues the organisation, rather than the insured person (‘IP’) him/herself. This makes sense, because it is usually the employer organisation that contracts with the claimant, and if negligent professional advice causes loss, the employer organisation is vicariously liable for the acts of employees. As one would expect, the PSE exclusion seeks to preclude cover for such costs under a D&O policy. Even if the claimant isn’t rational and they choose to sue the IP and/or his/her company, if the IP’s actions are not fraudulent, his/her defence should be relatively straightforward i.e. the buck passes onto the employer. If those costs are (for whatever reason) not indemnified by his/her company, it is not the responsibility of the D&O policy to act as surrogate for what clearly is a professional negligence scenario.

One view amongst underwriters is that there is no need for the PSE endorsement in the first place. Professional services ought to be provided in the capacity of a professional whereas a D&O policy ties the wrongful act to the insured capacity i.e. a director or officer. However, underwriters will seek to avoid doubt and apply the endorsement to reinforce the fact that the provision of “professional services” is outside the scope of the insurance. Whatever the view, the construction of the PSE is vital and, in broad terms, it tries to create a demarcation between D&O and PI insurance. It doesn’t always do this very surgically and it is often done rather clumsily. Problems can arise when broadly worded PSEs are routinely attached to the D&O policies of companies which, it might be argued, do little else but provide ‘professional services’, a term which itself is capable of generous interpretation. Some language excludes ‘service and advice’ which, if undefined, reverts to an ordinary English meaning. So, if you’re the director of your residential block, are you are providing a ‘service’ to the other residents? Probably. Will the transport firm be delivering a bus or train ‘service’ to its clients? Probably. That’s why language is so important.

The meaning of “professional” varies according to the context in which it is set, but it generally connotes pertaining or appropriate to a learned and traditional profession. The concept ought to be well understood and contextualised by the capture of the risk in a Professional Indemnity cover. It is perfectly legitimate to apply a PSE to a risk where the client ought to buy PI cover. However unlikely it is that a claim could find a way to the policy, it avoids any doubt. The difficulty comes where the construction is so generic and poorly refined that the application may extend beyond what one might reasonably contemplate as professional services for a fee i.e. within the province of a PI policy. Paradoxically, too broad an application of exclusionary language can potentially weaken the impact if challenged. D&O claims can be complex creatures and the fact patterns are rarely the same so it is unwise, and probably impossible, to prescribe a definitive position. Overwhelmingly, however, whatever the proximation of a discussion about policy language is, it ends up in the same place. And that’s with insurance brokers advice. Professionally served, of course. 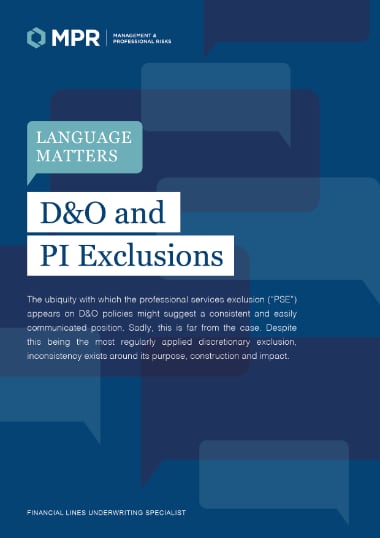 There is little doubt that Directors & Officers (‘D&O’) Liability is a sophisticated product which contains potentially complex concepts and processes. Despite the low profile in a D&O policy features showreel, ‘allocation’ is nonetheless a key component of any contract and plays a role in all claims.

Once upon a time, deductibles were a common feature of Directors and Officers (‘D&O’) Liability policies. Typically reserved for larger or more challenging private risks, or those that were publicly listed, they faded from view as the soft market invaded every element of the contract.

The heritage of ‘Order of Payments’ or “Priority of Payments” clauses is rooted in the introduction of entity coverage to the Directors and Officers (“D&O”) policy architecture in the early 1990’s.